This page has a historical overview of the Northern Territory (NT) and Australia in 1982.

On 3 July the Parap open air market began in Darwin.

In August the first 356 housing lots with a starting price of $17,000 were released in the newly established town of Palmerston.

Filling up at a Territory pump cost an average of 40 cents per litre for petrol.

Territorians were concerned about airfare price increases, increasing arrivals of refugees, and taxes.

In the NT Football League grand final the Wanderers scored a one point victory over St Marys.

The sale of fireworks was restricted to 1 July of each year.

Pancontinental Mining was given approval for the development of the $600 million uranium mining venture at Jabiluka.

The traditional owners of the area around the Jabiluka mine site were given the deeds to their land, the result of the second stage of the East Alligator land claim.

The township of Jabiru was officially opened.

The Larrakeyah Naval Patrol base was opened by Her Majesty Queen Elizabeth II. 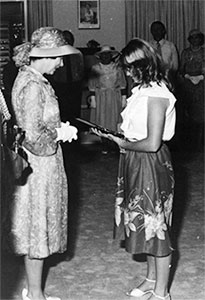 On 6 October 1982, Peta Lynne Mann received the Royal Humane Society's Gold Medal for bravery from the Queen for saving a 23-year-old man from a crocodile attack in 1981, when she was 12 years old.

In October, Lindy Chamberlain was jailed for the murder of her baby Azaria, following her disappearance at Ayers Rock on 17 August 1980.

East Arm Hospital, one of the last leprosy hospitals in Australia, closed after 27 years.

The funding for the brucellosis and tuberculosis (BTB) eradication campaign was more than doubled and a 1992 target set to have the NT completely eradicated from BTB. In 1982 tuberculosis in NT cattle had been reduced to 0.18 per cent.

Pinball machines were being researched to determine their addictiveness and were thought to be responsible for an outbreak of gang warfare in Darwin.

'We of the Never-Never' premiered at Parap Cinema. One of the principal characters in Aeneas Gunn's classic novel, 'Bet Bet' attended the screening.

Territorians were listening to Michael Jackson's 'Thriller' and Men at Work released the single 'Down Under', which topped the charts for six weeks.

Territorians were watching 'Fawlty Towers', 'Dr Who' and 'Countdown', and listening to Dad and Dave on 8DN radio.

Prince William was born in June.