This site has Cabinet record information from 1991, including Cabinet decision highlights from that year, a background to the Northern Territory and Australia in 1991, and the Cabinet members.

Information about the 1991 Northern Territory Cabinet Records booklet PDF (5.7 MB) is available to download or view on this site.

Highlight information about some key moments and events that happened locally in the NT, across Australia and internationally in 1991.

18 May – The inaugural Arafura Sports Festival begins in Darwin bringing together 20 teams from Australia and South East Asia to compete in more than 20 sports.

18 October – Kings Canyon Resort on Luritja Road via the Lasseter Highway between Alice Springs and Uluru, Central Australia is opened. 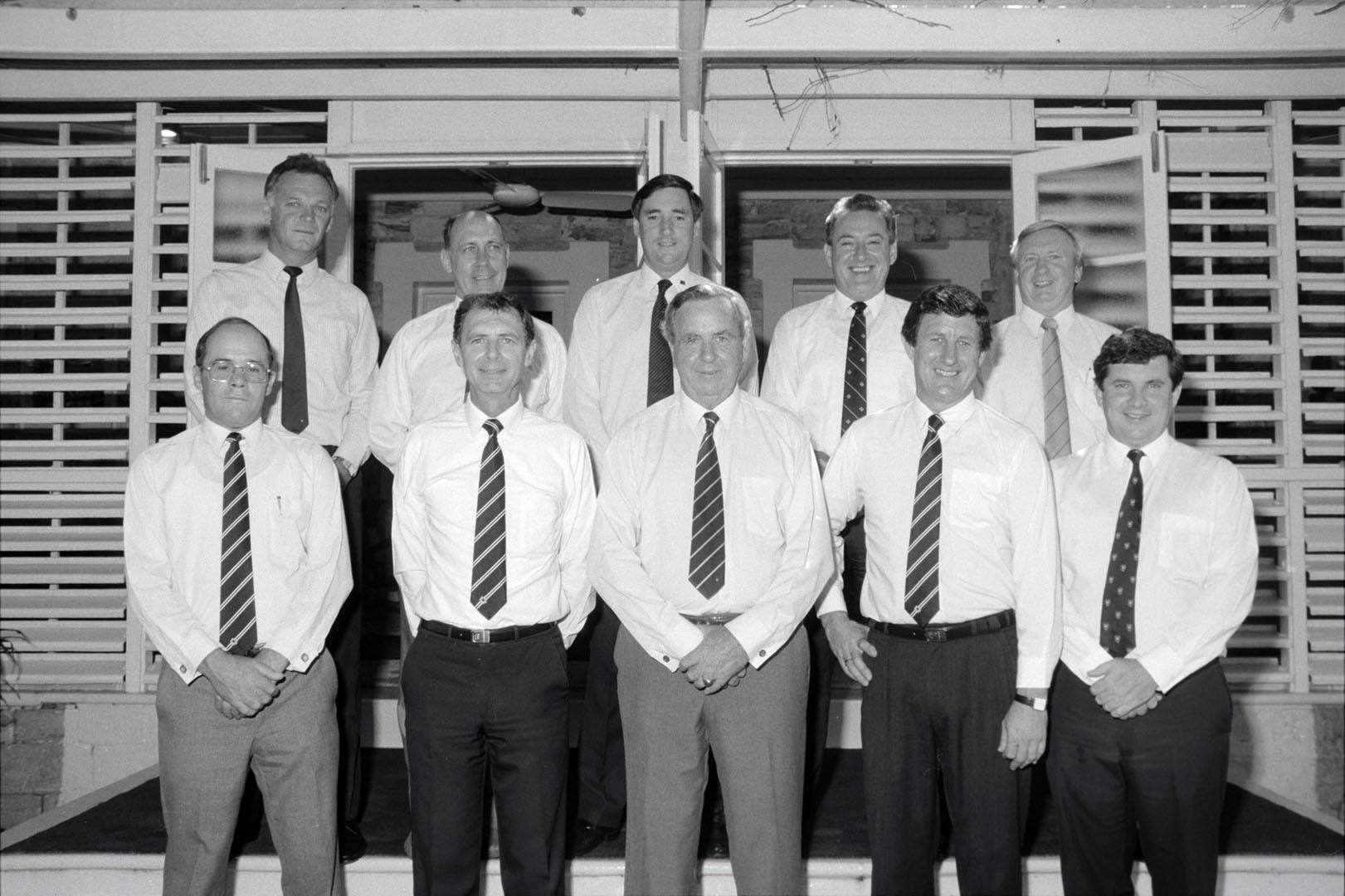 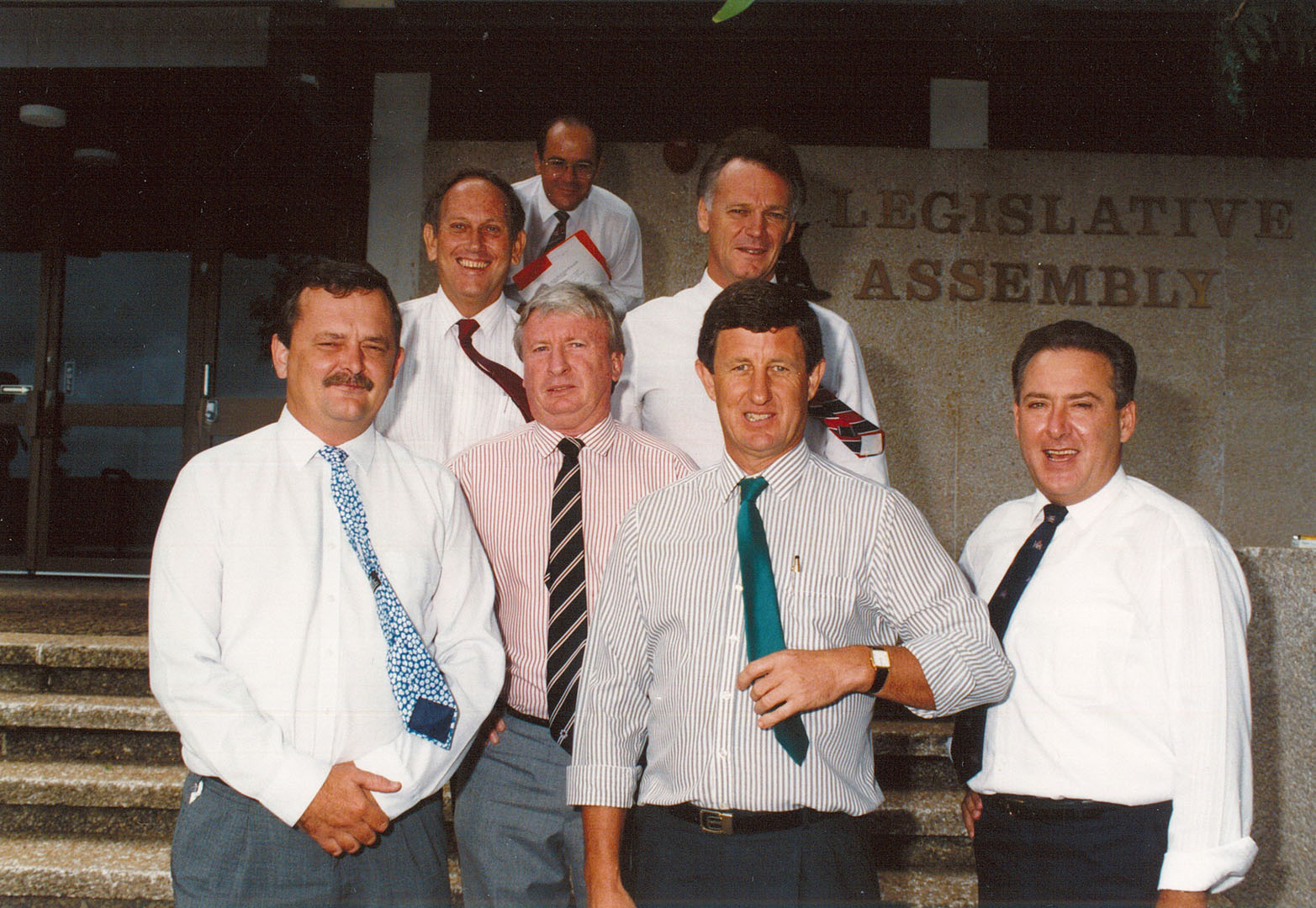 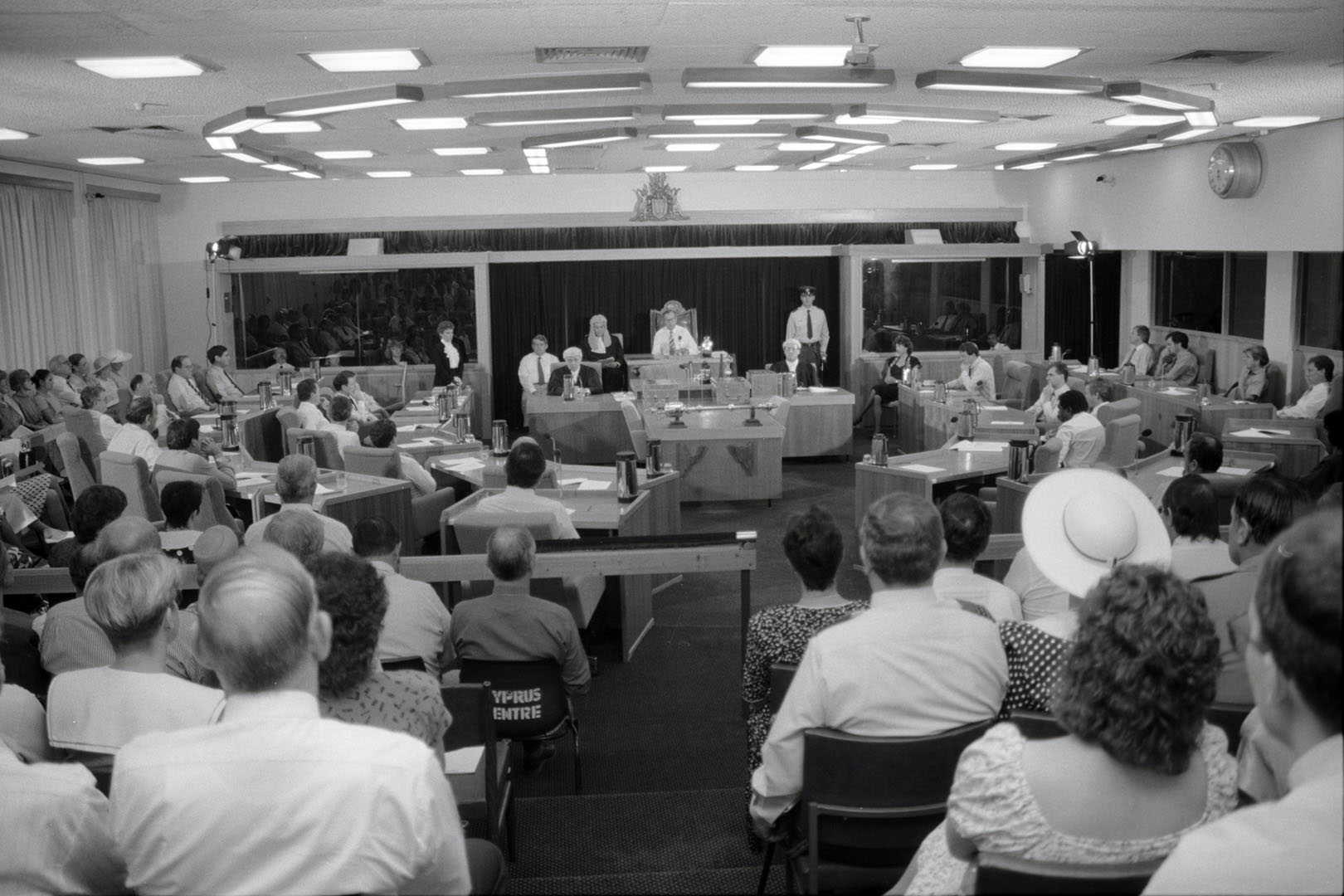 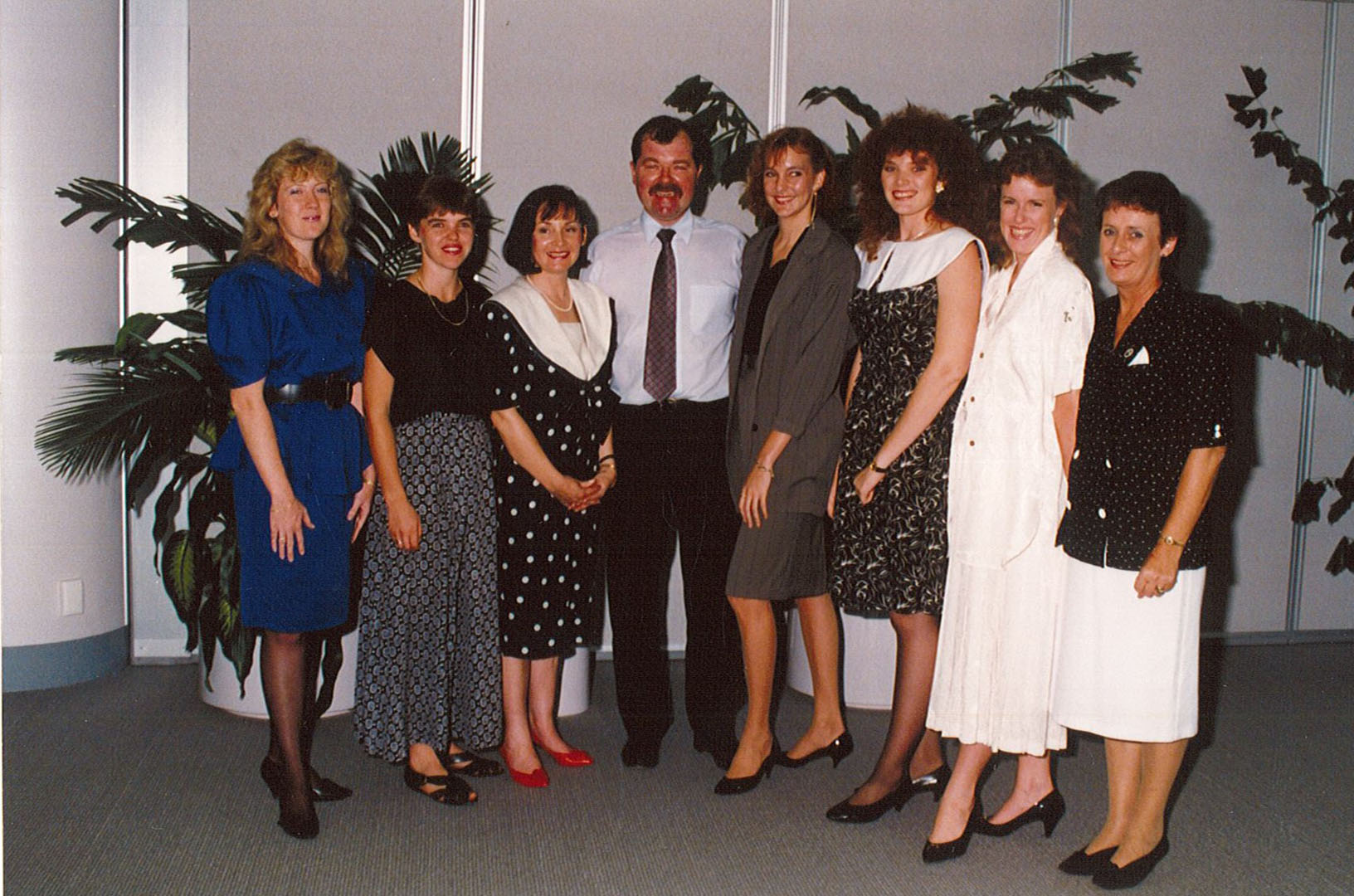 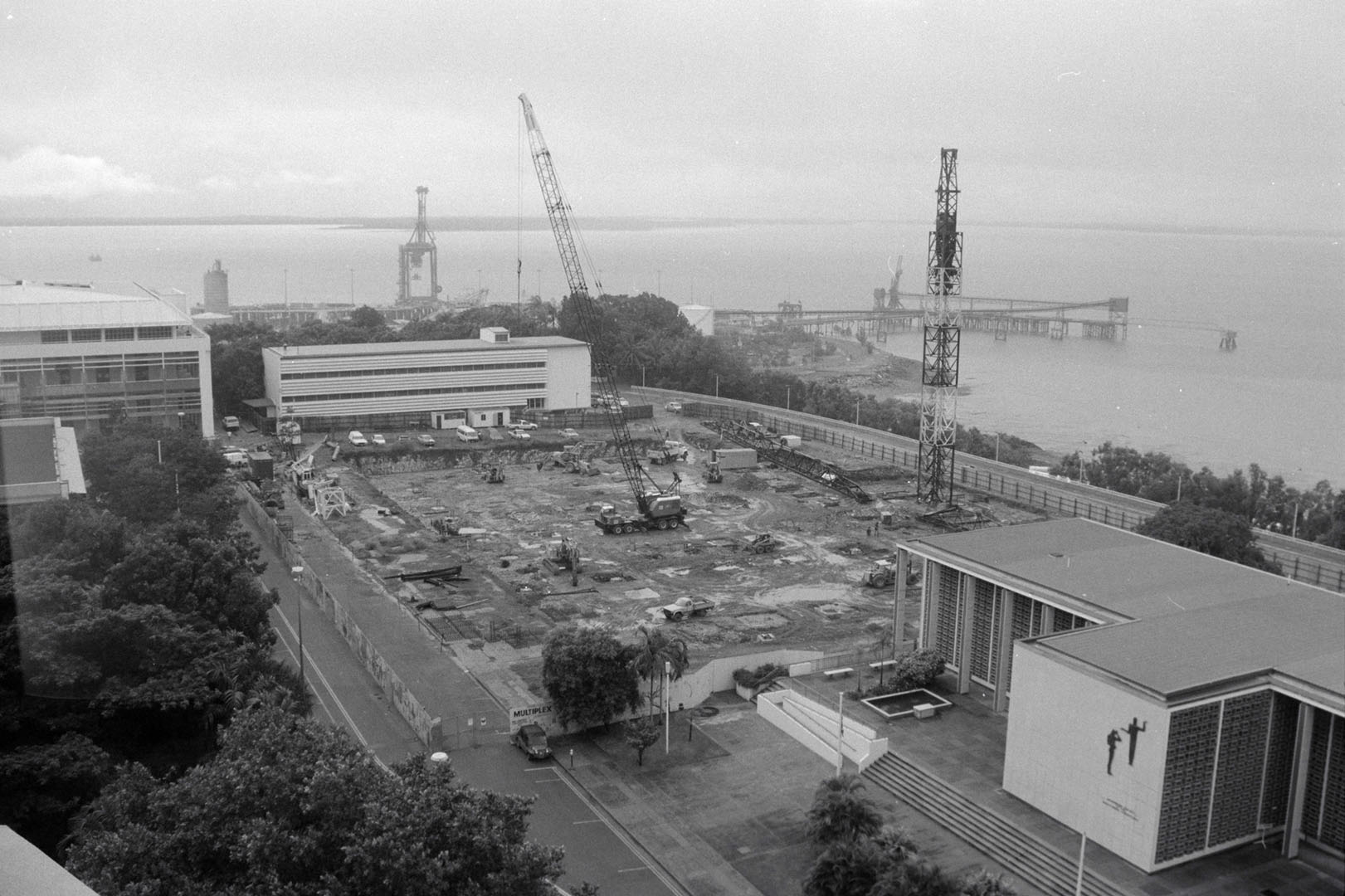 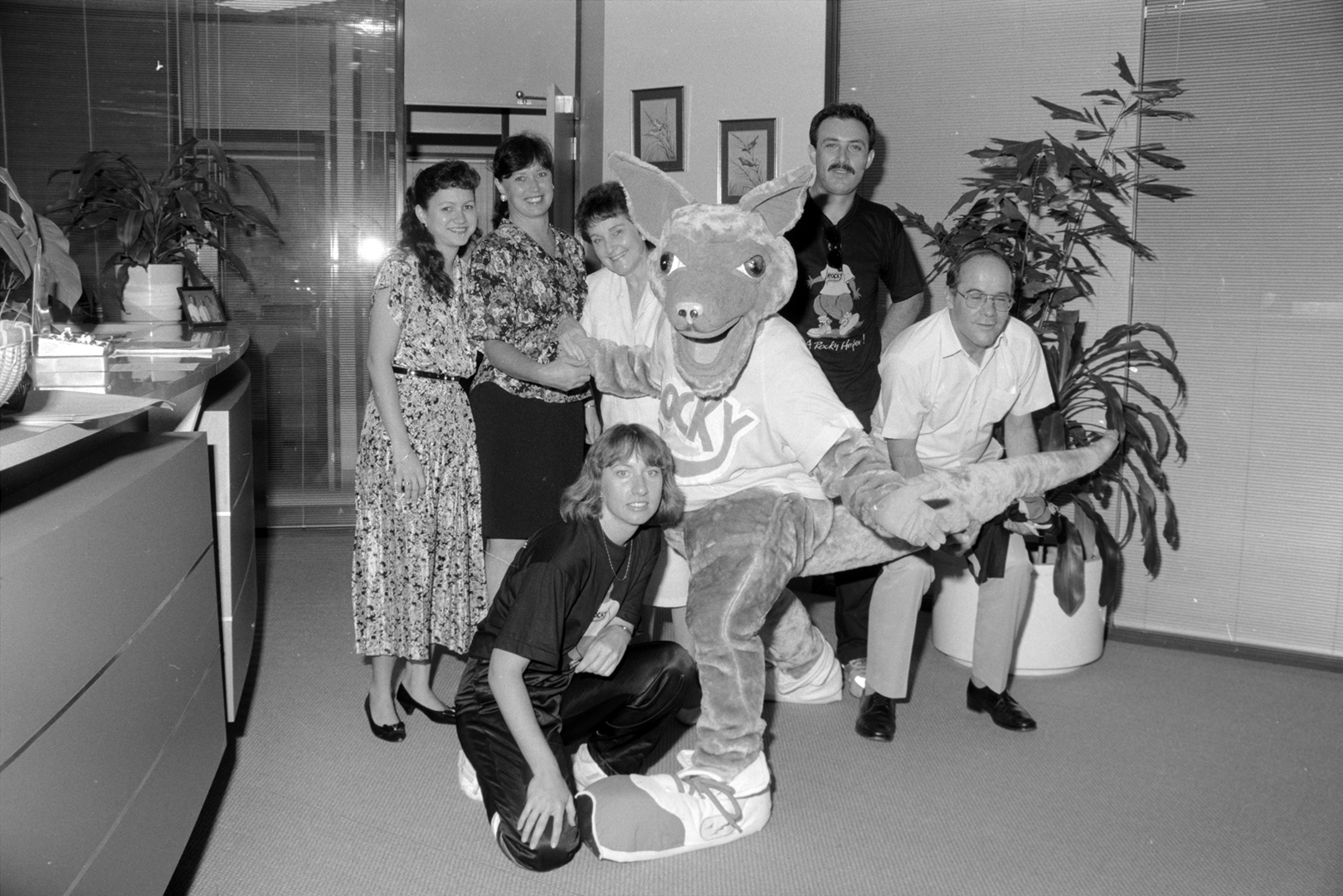 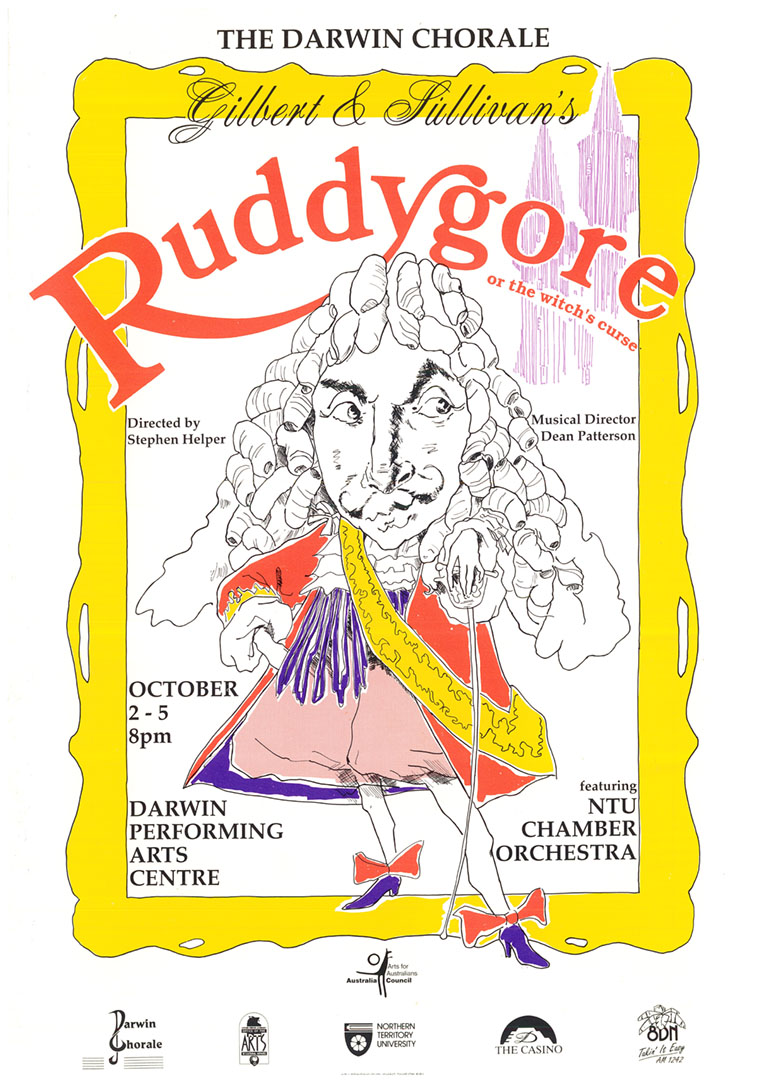 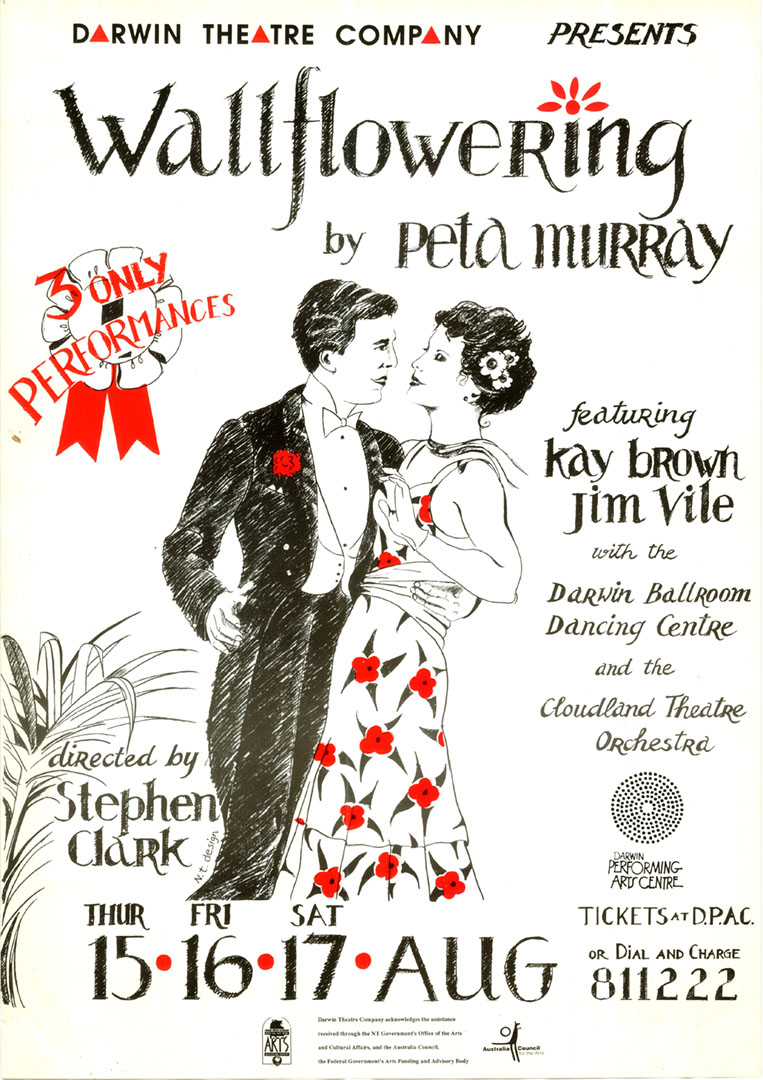 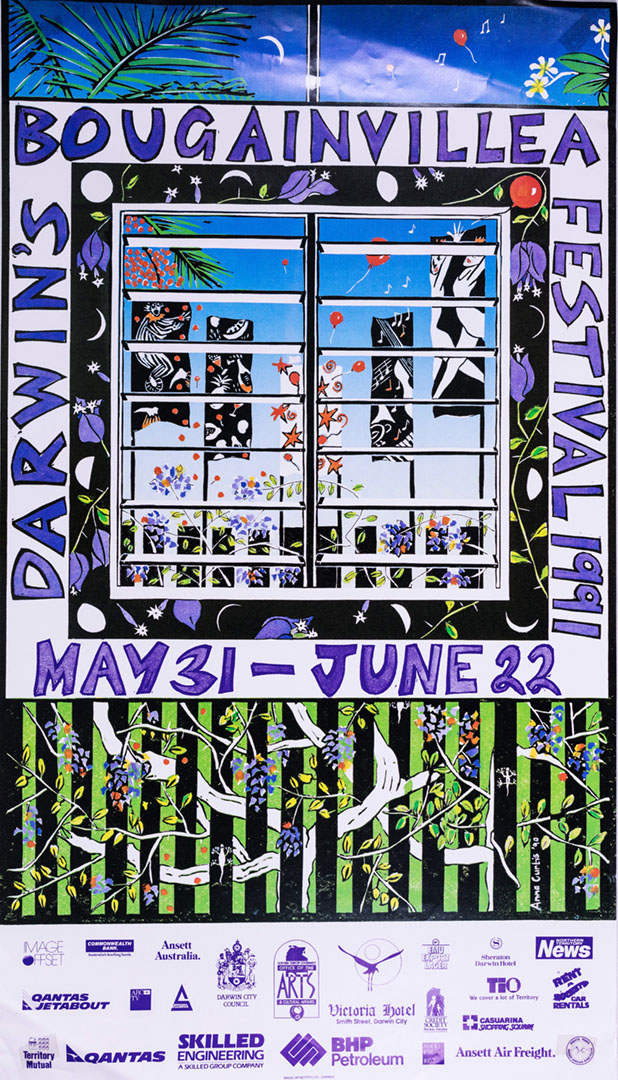 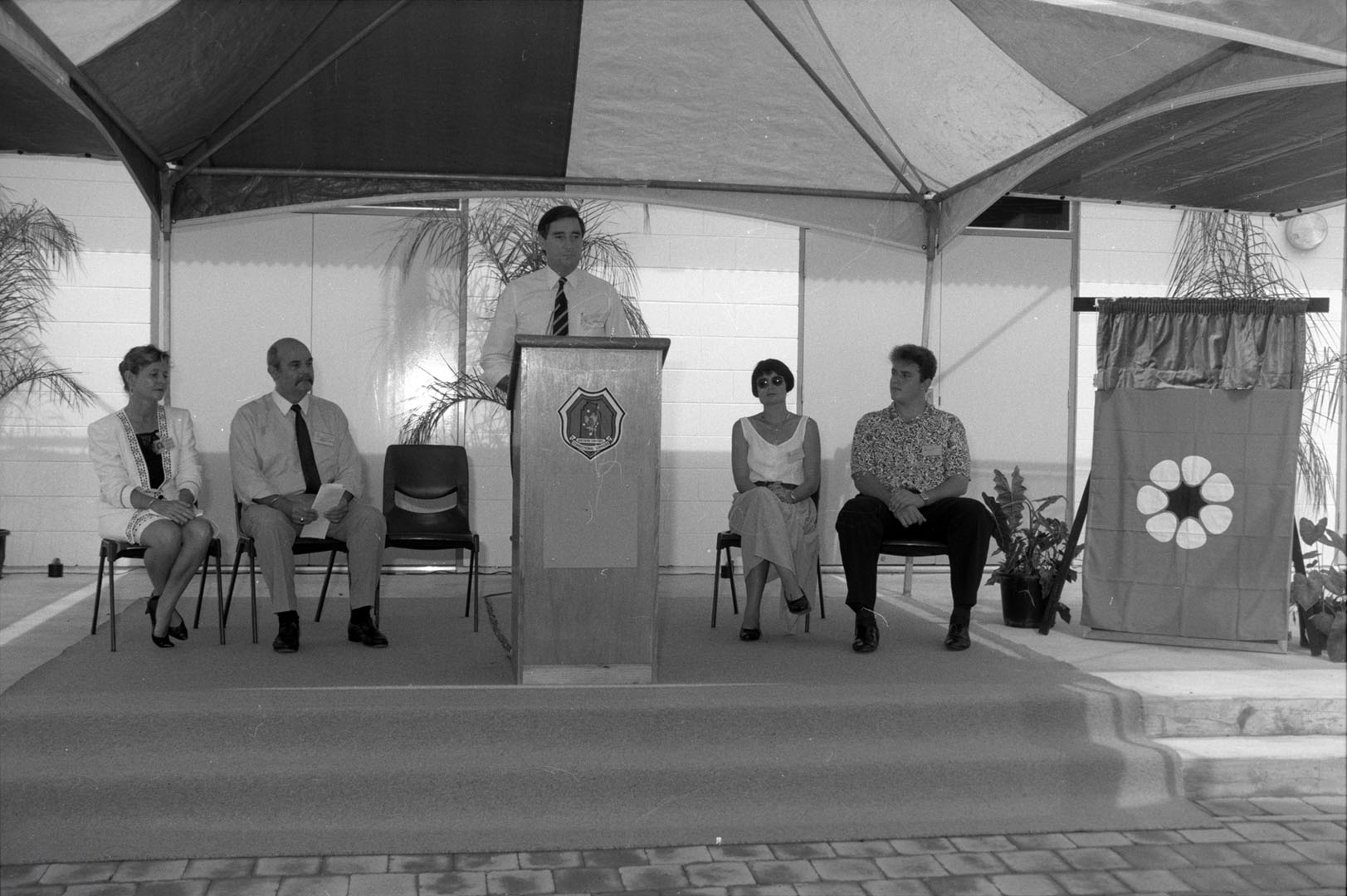 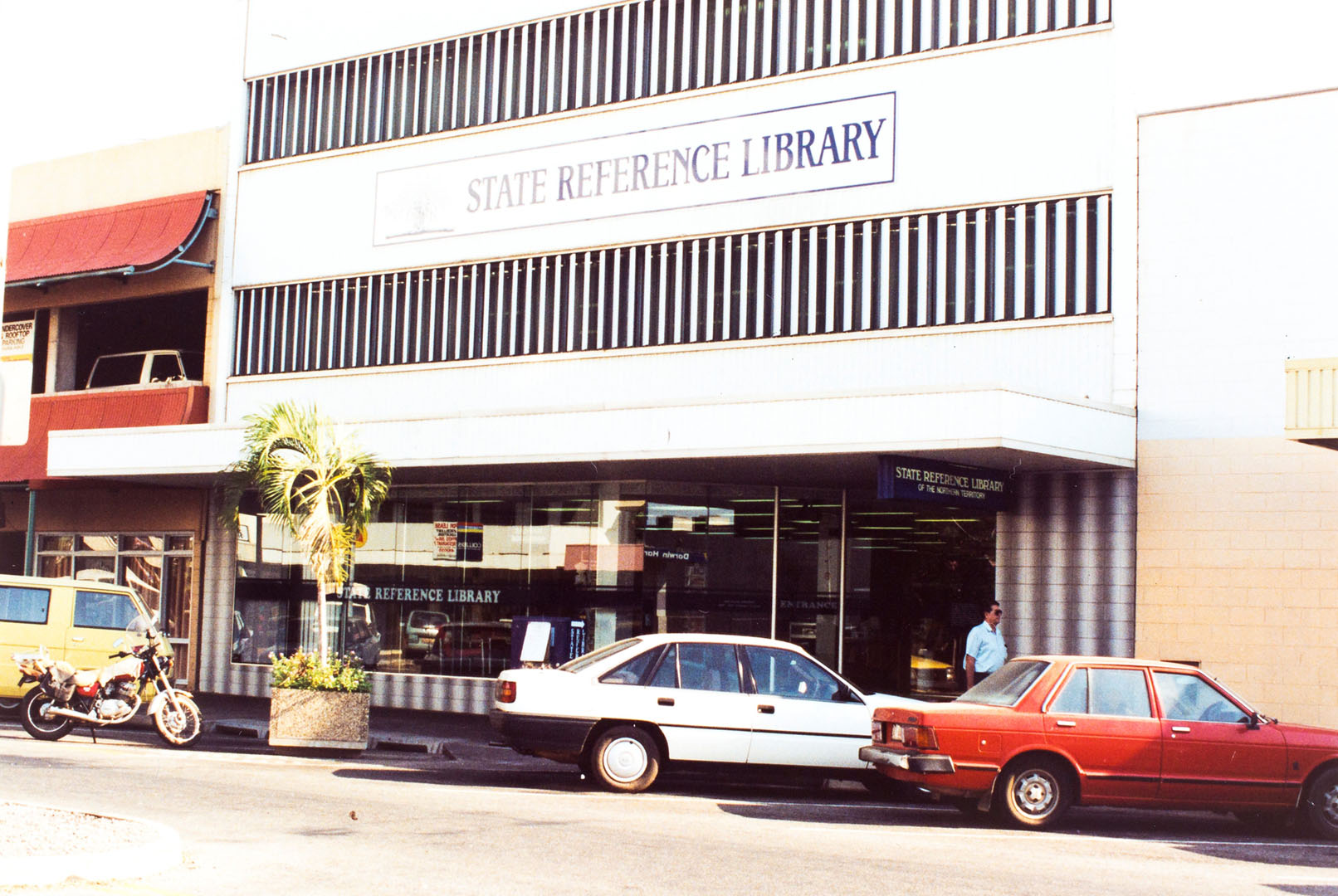 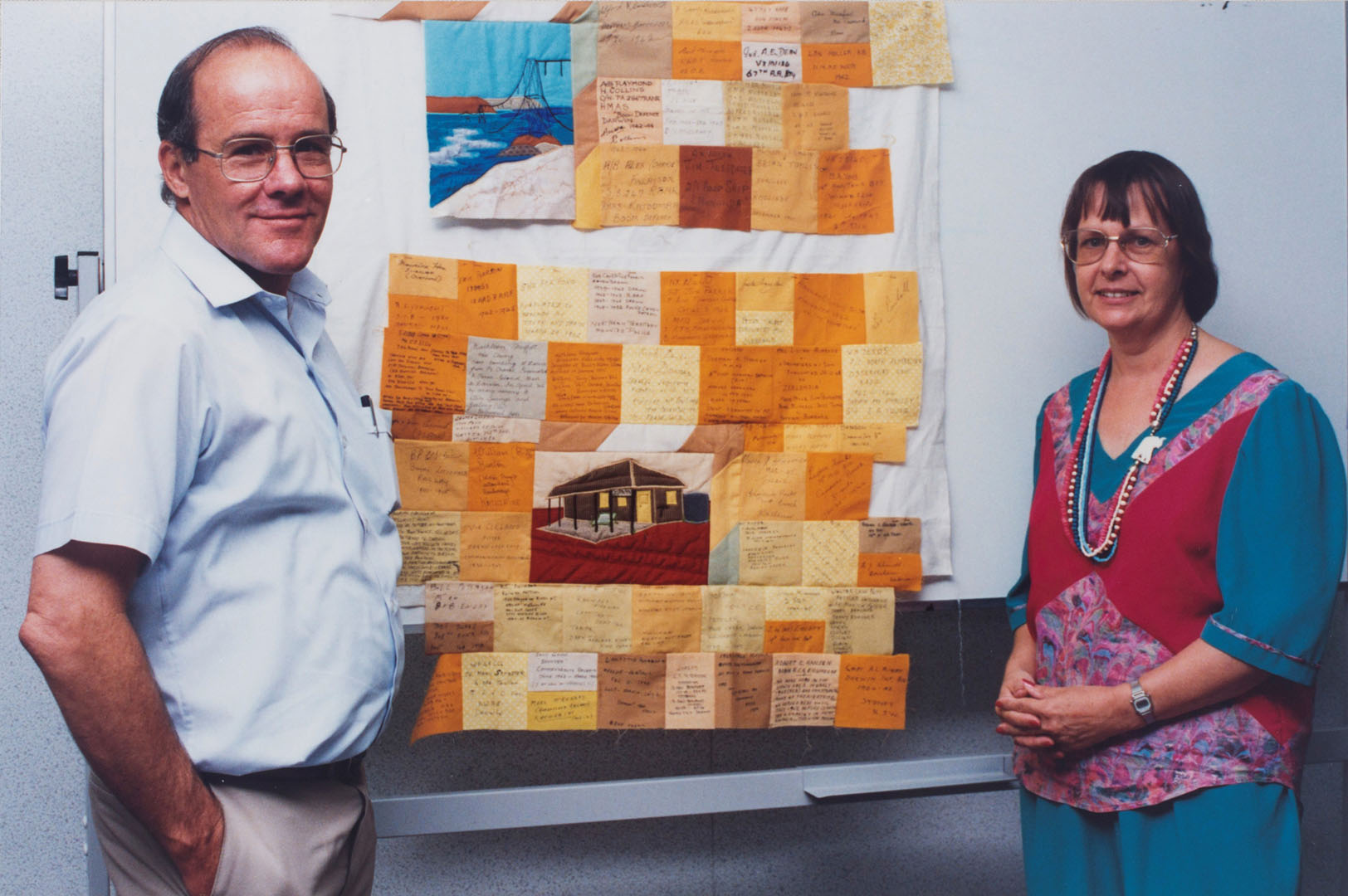 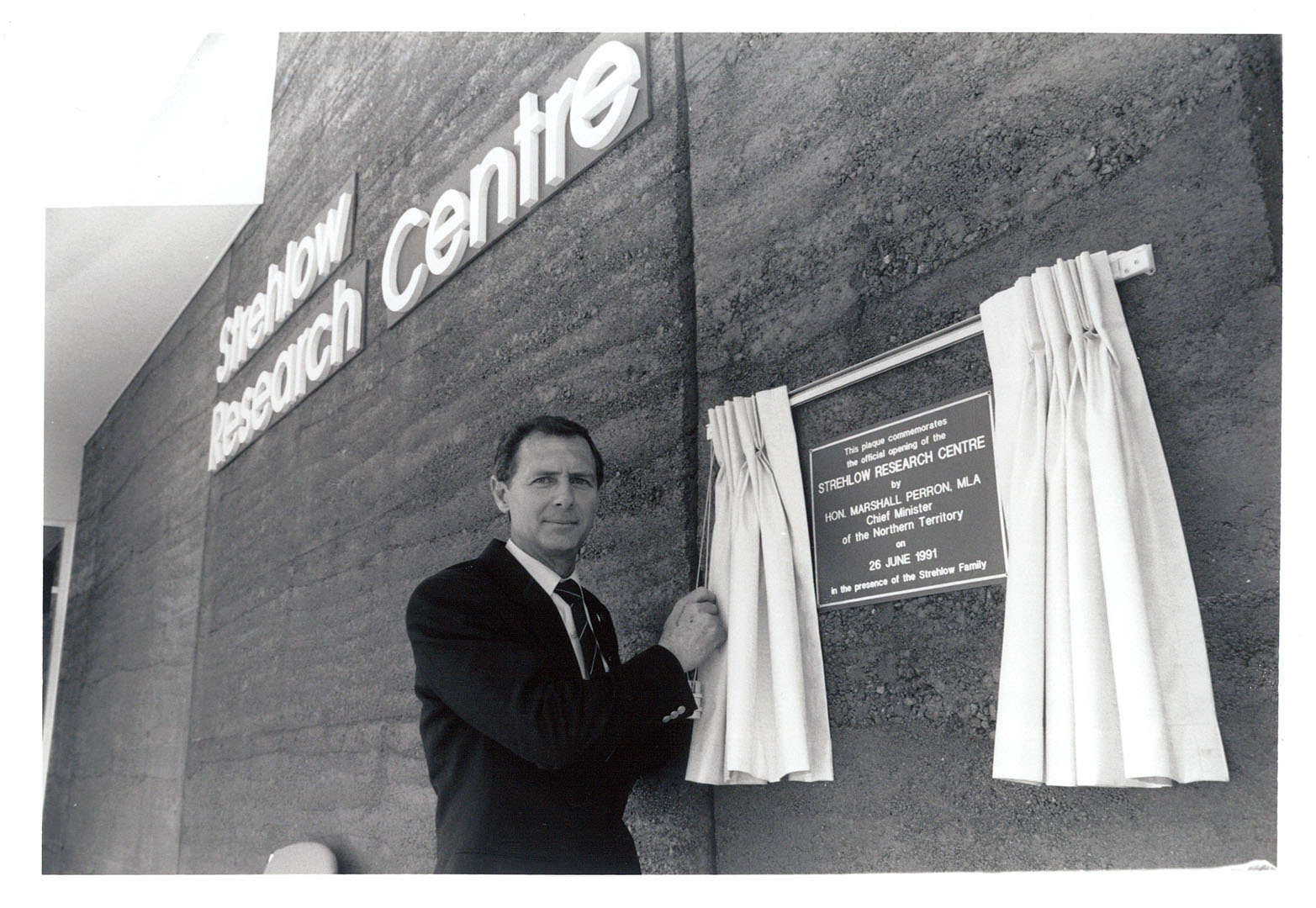 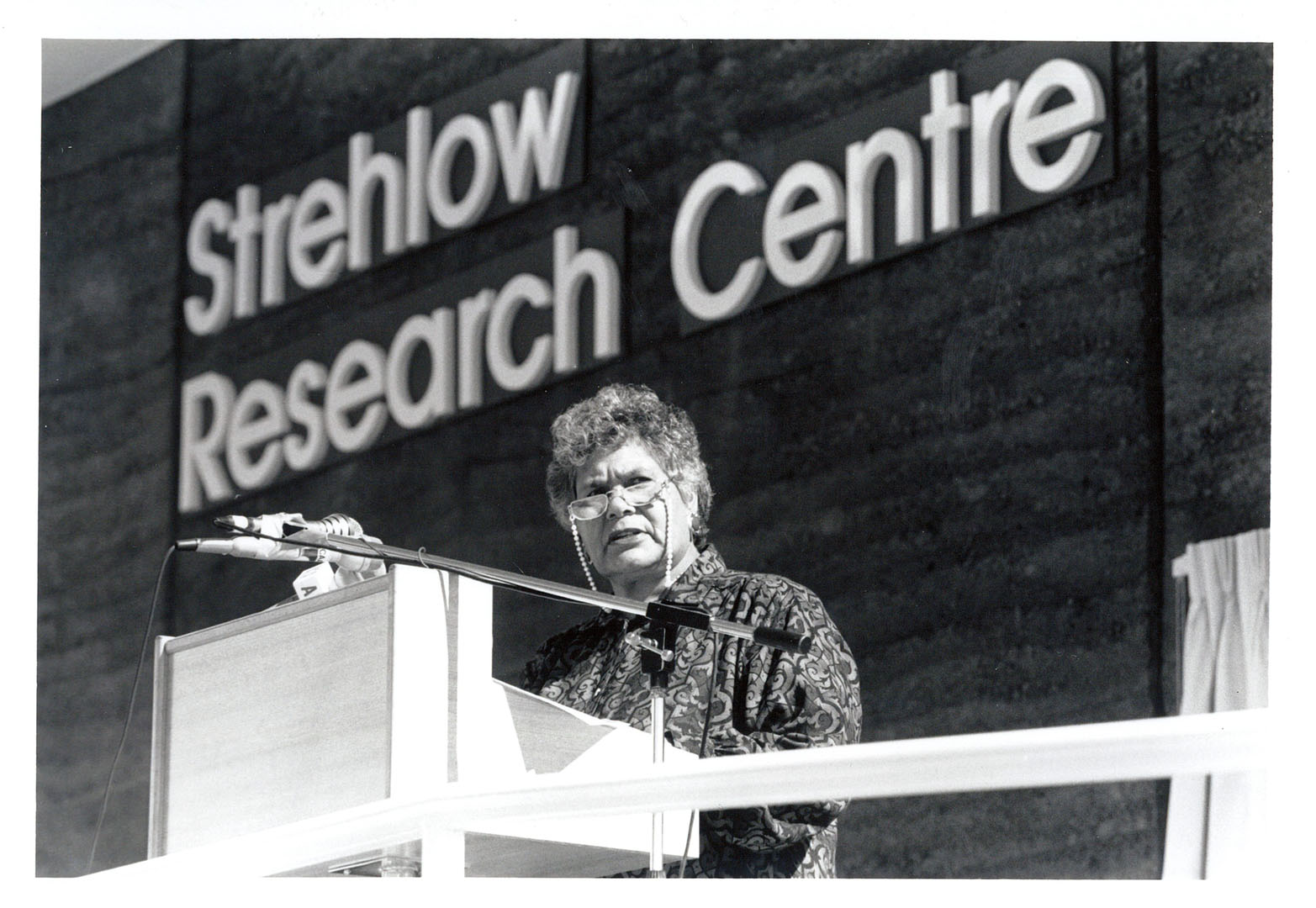 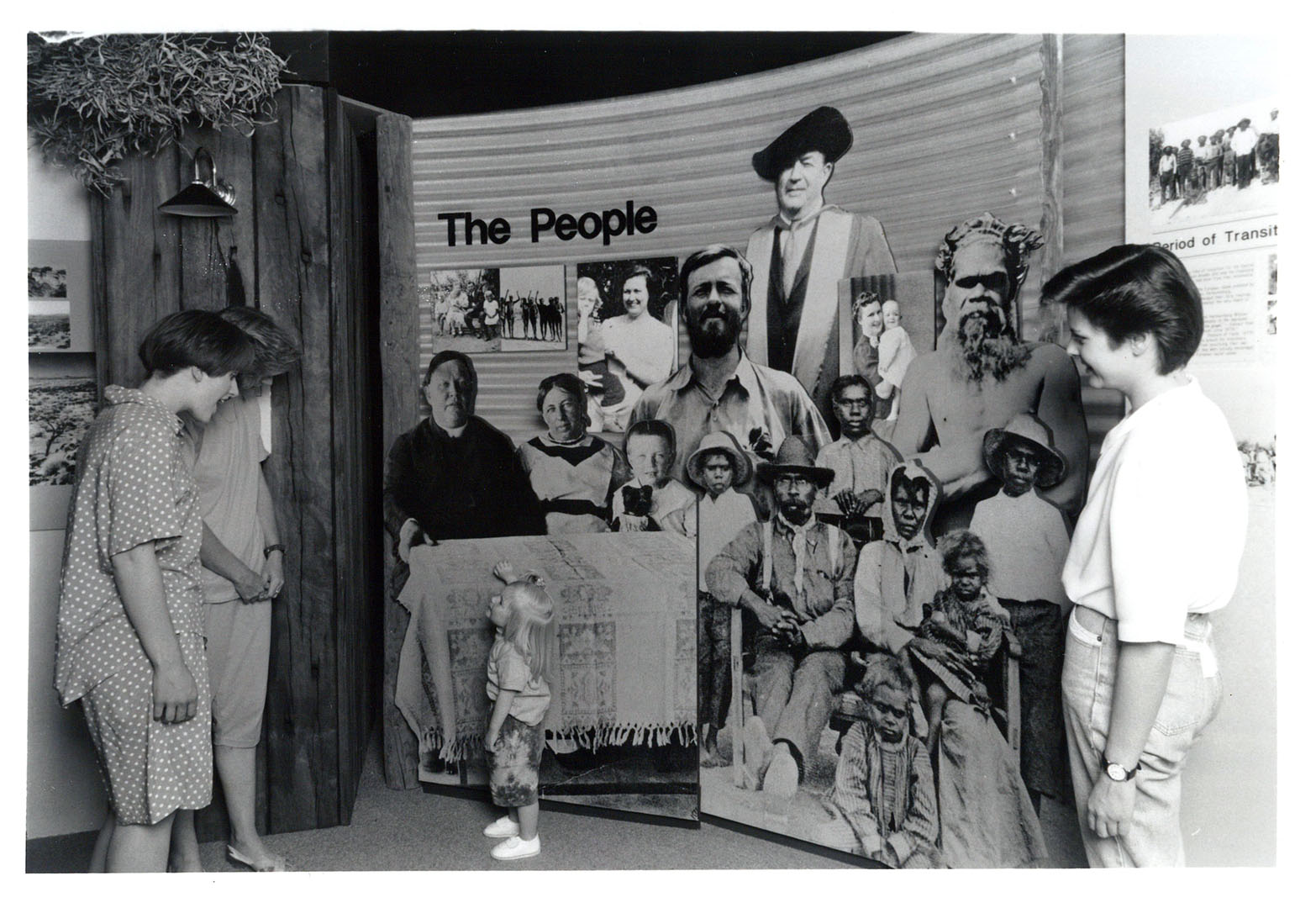 10 January – amongst escalating fears of full- scale war with Iraq, Australia orders its diplomats out of Bagdad.

14 January – a flood emergency is declared in the Queensland Gulf Country.

17 January – Prime Minister Bob Hawke gives battle orders to the Navy stationed in the Persian Gulf, following discussion with US President George Bush and the commencement of US air strikes on Iraq the day before. In the week following, peace marches across Australia demand for the withdrawal of Australian forces from the Gulf.

On 22 January at a special sitting of Parliament, a resolution supporting Australia’s commitment to the Gulf War is passed, however seven Labor MHRs and three Senators join the Democrats in opposition.

26 January – Professor Fred Hollows, an ophthalmologist who became known for his work in restoring eyesight for thousands of people across the world, is named Australian of the Year.

4 July– Leading Sydney heart surgeon Dr Victor Chang is shot and killed near his home in the Sydney suburb of Mosman. His murder is the result of a bungled kidnapping and extortion attempt.

August - The census conducted in August 1991 revealed that Australia’s population stood at approximately 17 million people. Of people counted in Australia 54.3% were aged less than 35 years and 11.3% were aged 60 years or older. The median individual income in Australia was $13, 950 and median annual household income was $29, 377. The median housing loan repayment was $563 per month, and median weekly rental was $110.

15 September – Federal Leader of the Opposition John Hewson reaffirms a consumption tax (Goods and Services tax), as integral to the Coalition’s electoral strategy.

24 September – the perjury trial of former Queensland Premier Sir Joh Bjelke-Petersen begins in Brisbane, ending in a hung jury 10:2. Prosecutors decide against a retrial on the basis of Joh’s advancing age and divided public opinion.

October to December – a devastating blue- green algal bloom occurs in the Darling River and the NSW government declares a state of emergency following the deaths of over a thousand livestock from severe drought.

24 January – the Government of Papua New Guinea signs a peace agreement with separatist leaders from Bougainville Island, bringing an end to fighting which had been ongoing since 1988.

29 January – in South Africa, Nelson Mandela of the African National Congress and Mangosuthu Buthelezi of the Inkatha Freedom Party agree to end violence between the two organisations.

26 February - Iraqi leader Suddam Hussein announces withdrawal of Iraqi troops from Kuwait. Iraqi soldiers set fire to Kuwaiti oil fields as they retreat. These fires last until November. The US President George Bush declares victory over Iraq and orders a cease fire, and US troops begin to leave the Persian Gulf in March.

18 April – As required in Resolution 687, Iraq declares some of its chemical weapons and materials to the UN, claiming that it does not have a biological weapons program.

15 June – Mount Pinatubo in the Philippines erupts, with the final death toll exceeding 800.

25 June – Croatia and Slovenia declare their independence from Yugoslavia.

1 July – the world’s first GSM (Global System for Mobile Communications) telephone call is made in Finland.

August – the Dissolution of the Soviet Union unfolds with the restoration of the white-blue- red tricolour flag to Russia, and subsequent declarations of independence for the countries of Estonia, Latvia, Ukraine, Moldova, Kyrgystan, Uzbekistan, and Tajikstan.

12 November – Indonesian troops open fire on a group of mourners and pro-independence demonstrators at the Santa Cruz Cemetery in Dili, East Timor during the Indonesian occupation of East Timor (Timor-Leste).

3 June – Warner Bros. Movie World on the Gold coast in Queensland is opened.

September – TV mini-series Brides of Christ goes to air on ABC TV, winning Logie awards in the following year for most popular telemovie or mini-series, amongst others.

3 December – American sitcom The Fresh Prince of Bel-Air starring American rap artist Will Smith makes its debut on Australian TV for the Nine Network. The series launched Smith’s career as a star of television and later film.

In Australia the top five popular music singles listed by the Australian Recording Industry Association included Bryan Adams, ‘Everything I do I do it for you’, Ratcat EP ‘Tingles’, the ‘Grease Mega-mix’ combining songs from the 1978 movie Grease; Daryl Braithwaite ‘The Horses’ and Guns’n’Roses hit single ‘You could be mine’.

In 1991 music bands such as Nirvana set the trend in fashion with blue denim jeans, tee shirts, cardigans and sweaters, cord jackets, polos and Converse shoes. Denim was ripped, knitwear was ragged, and hair was worn long and floppy, flattop or the ‘messy blowout’ style popularised by Cindy Crawford.

Members of the 1991 Cabinet

Under the Northern Territory Information Act 2002, public sector organisations are required to transfer their records to the Libraries and Archives NT no later than 30 years after the record was created.

Most archived records enter an “open access period”, whereby they are available for public perusal 30 years after the record was created. This includes the Cabinet records.

The original copies of all Northern Territory Cabinet submissions and decisions are filed by meeting date, and bound into books. These books are then transferred to the Libraries and Archives NT for safekeeping and preservation.

A full listing of Cabinet decisions and Executive Council records from 1991 are available:

Information available for viewing can be accessed by appointment at the NT Archives Centre.

Contact Libraries and Archives NT for more information and to make an appointment.

Please see below a list of highlights for 1991 Cabinet records.

In 1990, Government noted the NT University’s Master Plan and endorsed cost-sharing arrangements with the Commonwealth. The purpose of this Submission was to inform Government of the revised building program and of government funding. Master Plan staging details and costings are attached, along with a list of Commonwealth infrastructure projects for Australian Universities funded between 1991 and 1993.

Government approved funding for site works, which would commence after receipt of approvals for town planning, environmental, traffic, services, etc.

The Submission discusses funding for the Centre for the Aboriginal and Islander Studies building, Student Amenities building, stage 1 of the Library, a major Lecture Theatre, and an Administration building.

In 1991, Government approved funding for a Military History Heritage Sites and Trails Program to commemorate the 50th anniversary of the Bombing of Darwin in 1992.

A photographic map of proposed military heritage sites from Darwin to Alice Springs is attached, along with works proposed.

The Submission also indicates sites with visible relics from the only war fought on Australian soil; sites which extend from Alice Springs to Nhulunbuy. The majority of sites are within 7km of the Stuart Highway and accessible by conventional vehicles for 99% of the year. It also provides the locations of a selection of relics, including munition stores, trenches, and gun emplacements near old airstrips.

Government approved a package of home assistance schemes aimed at assisting low and middle income groups to attain home ownership. As described in the strategy document, ‘Housing for the 90’s’, the goal of increasing home ownership in the Northern Territory is complementary to that of reducing the proportions of public rental stock and the transfer of Housing Commission dwellings to private ownership.

The HomeNorth Loan Portfolio is a package of home assistance schemes comprising of:

The schemes are subject to assessments of family income to ensure the eligibility under the Commonwealth State Housing Agreements and the Home Purchase Assistance Account. Details of income levels, interest rates and repayments are attached to the Submission.

Riding in the back of trucks

These amendments followed the high number of deaths of persons killed while riding unrestrained in the open load space of vehicles between 1978 and 1990, the statistics of which are contained in the Submission.

The Submission includes the cost to the community for spinal injuries, and discusses a road safety research study undertaken by the United Kingdom, which examined back of trucks accidents in Papua New Guinea and the effectiveness of roll cages.

The Submission also approved amendment to motor vehicle legislation to give the Registrar of Motor Vehicles the power to approve modification of vehicles used in remote communities to provide protection for passengers travelling in an open load space in the event of a roll-over. This provision was required for vehicles in remote communities where conventional transport was not a practical proposition due to poor local road conditions. Remote communities were given two years to modify vehicles.

An education and publicity program by the Road Safety Council was also approved.

The role of a district centre is to provide commercial, industry, recreational and community uses to cater for those attracted to the locality as a place to live or visit.

The purpose of this Submission was to note the scale and location of a district centre to serve a Berry Springs catchment population estimated at 14,000. This estimate was derived from the population horizon of one million contained in the Darwin Regional Land Use Structure Plan 1990, of which 10% were expected to reside in rural residential circumstances. In March 1991, the population of the Berry Springs catchment was estimated at between 800 and 900 persons.

Attached to the Submission is the ‘Berry Springs District Centre – Progress Report’. The report includes an evaluation of two other site options, development phases, design principles including commercial and retail services, tourist accommodation, a junior high school site, residential lot sizes and use of septic tanks, infrastructure considerations including possible adverse impacts of run-off and effluent on the Berry Springs Nature Park and Territory Wildlife Park, and strategies to minimise the impact of stormwater drainage on the District Centre and Berry Creek.

Government noted the information in the Report.

The purpose of this Submission was to approve the drafting of a Public Sector Employment and Management bill incorporating principles relating to the delineation of the functions, responsibilities and accountability of both Chief Executive Officers (CEOs) and the Public Service Commissioner, simplification of human resource management procedures, and increased staff mobility across the Public Sector.

The need for new legislation arose when it was identified that separate employment arrangements for the public service, the teaching service, and the Power and Water Authority posed barriers to Government’s capacity to deploy and manage staff, as circumstances demand. The new legislation provided the opportunity for flexible management structures to be introduced and deficiencies identified by CEOs to be addressed.

In the Decision, Government approved the drafting of a bill that will apply to all public sector employees, and will include objectives relating to personnel and management practices, ethical values and the conduct of employees. It also replaced the Office of the Public Service Commissioner with the Office of a Commissioner for Public Employment whose functions, as the statutory employer, will be concerned with issues of corporate principles and policies rather than with departmental operational matters.

Further detail is available in the Submission.

In 1990, the Territory Government approved the drafting of equal opportunity legislation that reflect the preferences of the Territory community, and would support the policy statements of previous Ministers and Chief Ministers: "... that each person has the right to be treated with dignity and to make decisions unrestricted by assumptions based on prejudice".

A comparative table is attached, showing the grounds of discrimination applicable in other Australian State and Commonwealth Governments.

Also attached is a summary of case studies on actual complaints handed by the Western Australian, South Australian and Commonwealth Human Rights and Equal Opportunity Commission.